Maybe We DO Have the Authority to Stop War

Cleaning house, I found this sketch I made at the Art Institute of Chicago.

It’s a Turner painting of a roiling sea. I used the image of the original to illustrate: More war? “PUT A MUZZLE ON IT!”

Imagine war as a storn-driven sea. Imagine if (like Jesus) we had the authority to command, “PUT A MUZZLE ON IT!”

What if our speech acts could stop war in its tracks?

Posted on March 8, 2016 by comehomeamerica

The post I intended to write was a riff on something I read in The Concise Untold History of the United States by Oliver Stone and Peter Kuznick: “The Vietnam Veteran’s Memorial, dedicated in November 1982, contains the names of 58,280 dead or missing Americans. The message is clear — the tragedy is the death of those Americans. But imagine if the names of 3.8million Vietnamese, and millions of Cambodians and Laotians, were also included. The wall, whos length is 493 feet, would be over eight miles long.”

“Eight miles long.” That’s something to think about.

Before I sat down to write, however, I watched a film about Maya Lin and the creation of the Vietnam Veteran’s Memorial: Maya Lin: A Strong Clear Vision. It stopped me in my tracks.

Before I talk about where we ultimately need to get to, I need to talk about something remarkable that has already been done.

The memorial designed by Maya Lin did something that hadn’t occurred to anyone before: separate the grief for dead soldiers from the valorizing of war.
How could I have failed to remember the magnitude of what she accomplished? The controversy over the Vietnam Veteran’s Memorial happened in the period right after I graduated from college. Some people opposed the memorial because it looked like a “black scar in the ground.” The film helps make very clear the need they felt to make the memorial about glory.

But the film’s footage of veterans and families also makes it clear what the vast majority of people wanted and needed: help in dealing with grief.

Maya Lin was 21 when she provided the design for the memorial. Throughout a controversy that became very acrimonious — including racist slurs against her personally — she hung in there and reminded people of the artistic intent behind the design. She is a model of courage and poise.

We antiwar activists should watch and learn. 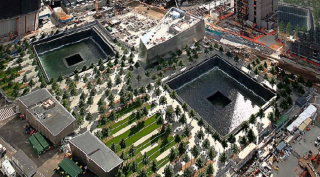 I was back in New Jersey to visit with high school friends in July. It gave me the opportunity to visit the newly opened 9/11 Memorial. Not surprisingly, what I saw made me spend days and weeks thinking about the memorial itself, and the larger issue of 9/11 in our national life. Out of all that I have seen and heard and read and thought about, several thoughts keep rising to the top. 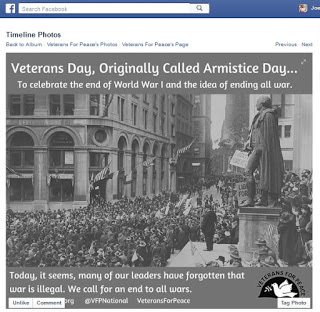 On November 11, 2015, Veterans for Peace had a message about reclaiming Armistice Day that proved itself massively spreadable on social media . . .

(See What will it take to reclaim Armistice Day for peace? )

In a composition suggestive of a yin-yang symbol, a woman in a burka (but wearing audacious red glitter platform heels) is surrounded by genie-ish tableaus of the many male obsessions/pastimes that some of us rail about frequently — sexualized pop singers, professional sports — as well as some that we probably should rail about more (such as patriarchy in religion and political violence).

The Last Supper is a staggering collection of 600 plates that the artist Julie Green has painted with images and notations about the last meals of people put to death in states across the US.

(See Communion of a Different Sort: “The Last Supper” at the Block Museum )

I felt Chicago should build a Chinese garden as an emblem of the city’s respect for its relationship with China. To my mind, the only suitable way to do this was to build a replica of the garden from Dream of the Red Chamber. (Not a bad idea for a city who’s motto is Urbs in Horto – City in a Garden – right?)

We are looking for antiwar conservatives

Why Michael Hayden, “The Case for drones” John Brennan and unfortunately, Obama and Clinton are guilty of war crimes

The letter to the Times from FAISAL BIN ALI JABER should break our hearts. His
brother-in law, an imam, who preached against hateful Al-Qaida was taken out by
a drone. This is a common experience he relates. It should have changed America, and yet he writes that the article by Michael Hayden, former head of national intelligence, published by the Times and representing Obama, is unbelievable.

“I have lived the reality of drone warfare. In 2012, drones attacked<http://www.nytimes.com/2013/02/06/world/middleeast/with-brennan-pick-a-light-on-drone-strikes-hazards.html> the wedding
celebration in Yemen of my eldest son.I survived; two of my relatives did
not. My brother-in-law Salem was an imam. Days before his death he preached
against Al Qaeda’s hateful ideology, as he had many times before. My nephew
Waleed was the village policeman, keeping our townspeople safe. END_OF_DOCUMENT_TOKEN_TO_BE_REPLACED

Does Society “Decide” to Engage in War?

I think if you asked most people, they would say that (a) war is deeply ingrained in society; and (b) society over and over again decides to engage in war.

There is a growing discourse around point (a): people are starting to unpack the idea that “war is deeply ingrained in society,” and growing in understanding that this is not the same as saying “war is part of human nature.”

I worry that there is less insight around point (b). At least in the United States, I think people continue to believe that war is a societal choice. I think this is not true.

In theory our Constitution is all about the people — through Congress — maintaining control over the decision to go to war. As it stands now, as a practical matter, that’s not really what’s happening.

I invite people to study the graph of historical US military spending below. It shows that there was a time when military spending went up when the US began to engage in a specific war, and then went back down after that war. Later, that pattern changed.

It is very interesting to consider why this change occurred. (Perhaps that’s a topic for a later blog post or two.)

(Think about US military action during your lifetime. In what ways, if any, did society at large determine what happened?)

If we confront this reality, what might this cause us to do differently?

More than anyone else, the beneficiaries of permawar are the politicians who thrive on the power to make and control wars. The number one prime beneficiary is the President, as well as presidential aspirants. But it doesn’t end there . . . .

(See J’ACCUSE: The Beneficiaries of Permawar )

The decision about whether to live with the threat of nuclear annihilation is our decision. And that is why the entire country is mobilizing for mass action for nuclear disarmament in 2015. Are we capable of making sure the messengers — Obama, Putin, the other agents of government — hear their instructions from us clearly?

Right now we’re “stuck” — the portion of the public that wants to cut military spending has hovered in the high 20%s since 2004; it just can’t seem to break the 30% barrier. (The percentage of people in favor of expansion is about the same.)

(See Cutting Defense: Are We STUCK? ) 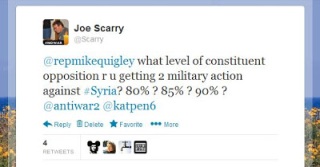 It’s essential that we demand our members of Congress get on the record now about the opposition to U.S. military intervention in Syria that they are registering from their districts.

(See On Syria, It’s Time for Congress to Remember Who They Represent)