Posted on April 8, 2016 by comehomeamerica

To all those of you who are against war and militarism. The past five years we have built a new peace movement.  What mattered most was our initial Come Home America letter which will remain up as an archive. As of today, April 8, we are no longer regularlly updating the site. Please contact us if you have any interest in reviving chapters in your area.

By Joey B. King

There is a move in Congress at this time to require 18 year-old women to register for Selective Service. Some say it is about equal rights. I say, the time has come to end the Selective Service System (SSS) altogether.

From 1975 until 1980, the country no draft, nor did we have SSS in place. I should know. I graduated high school in 1980 which made me among the first group of young men required to register for SSS when it was reinstated amidst the fear posed by the twin threats of the Iranian hostage crisis and the Soviet invasion of Afghanistan. That “peace monger” Jimmy Carter reinstated the SSS.

In fact my mother sat me down one day in early 1980 and said, “You should consider taking ROTC for your college physical education, because we are going to war again. You’d be better off as an officer than an enlisted man.” I took my mom’s advice. As the threats subsided, I decided to commit to ROTC and became an Army officer. It was one of the worst decisions I could have possibly made.

I cannot support any scheme which would force young people into servitude in an institution that is extremely violent and oppressive, internally and externally. Because I do not support the draft or mandatory draft registration, I will not support its extension to women. This is not about equal rights, in my opinion, but rather about equal oppression. I understand that another amendment has been proposed that would eliminate Selective Service altogether. I could support that.

There are no plans underway to bring back the draft. Neither the Pentagon nor the politicians need it or want it. However, the Selective Service law requires young men to register when they are 18.

Those who do not register can theoretically be prosecuted and jailed. In order to minimize resistance, however, the government is relying on “passive enforcement.” If young men seek federal assistance for education or job training, they must show proof of registration.

To require young women to do the same would certainly spread the burden, but I don’t see how this would advance women’s rights

Looking in The Mirror: How the US Only Sees Itself in Its Putin Propaganda

Posted on May 9, 2016 by comehomeamerica 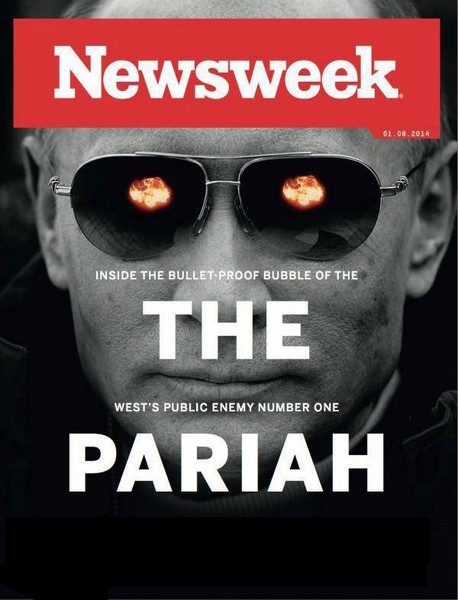 Yes.  In the famous words of Pogo:

That’s how paranoia works.  We project onto a feared “other” our own unacceptable desires.  In Putin’s case, it’s our unacceptable wish to incinerate him and all Russians with him that we may rule the world.

Not out of avarice, mind you.  Or so the noble lie goes.  But out of our selfless compassion. Our Christian compassion, if that floats your boat.  Yes, indeed.  We selfless, exceptional Americans are willing to bear the heavy burden of world hegemony–not for all the power and wealth it brings us.  Perish the thought!  But for the peace and prosperity our rule will bestow on all the colored peoples of the earth–drop by drop–beneath us.

That’s what our leaders tell us.  And that’s what the mainstream media echo back to us–again and again and again.  That we’re the best.  The greatest.  The goodest.  The purest.  We act always only for others.  Our motives can never be questioned.  For Americans alone can judge what is good and what is evil.  We’re like God in that way.  That’s why Americans ate so much from the Tree of Knowledge in the first place!  END_OF_DOCUMENT_TOKEN_TO_BE_REPLACED

Hilary Putnam: compassion and questioning as a guide to life

Posted on April 6, 2016 by comehomeamerica

[Editor’s note: Mathematician and philosopher Hilary Putnam died last month. Dr. Putnam was an open critic of the Vietnam war. His fields of knowledge so wide ranging and eclectic, they deserve an obituary equally so. Below is Alan Gilbert’s essay on his friendship with Dr. Putnam. It’s controversial and difficult reading, clearly not from a libertarian or conservative antiwar perspective, but any man whom the reactionary Weekly Standard describes as “[having] politics usually ranged from the reprehensible to the inane” must be mourned. – Angela Keaton]

Hilary was my dear friend (one of my dearest), a human being of great depth, a philosopher, learning from Maimonides and Dewey, how to write subtle guides for life, compassionate, a communist or social democrat in the sense of wanting everyone to flourish and not accepting the denial of most humans to advance the few, an anti-racist his life long, a buster-up of the silly antiseptic and self-refuting conventions of centuries-old empiricism and “value-free economics,” a questioner, as philosophers from Socrates are, initially a positivist a la Reichenbach and Carnap (who were way sophisticated about physics and politically decent, but often wooden…), a founder of scientific realism and a realist theory of reference, a pragmatist about good moral judgments as opposed to a self-refuting skeptic, a thinker about what good judgment is in ethics, the arts and religion, a practitioner of a responsive to the suffering and neediness of others, tolerant Judaism, a devotee of his wife, children, grandchildren and friends, a lover of poetry, an anti-fascist.   Philosophical questioning is important, but life is the point.

That philosophy is irrelevant to ordinary life is a common prejudice in commercial America; Hilary’s being and vision incarnated the opposite.  Yes, Hilary changed many of the overall positions/visions he espoused because learning from Socrates, he kept on thinking and asked new questions.  He moved on the basis of argument. And since Hilary was very, very smart, he always changed the terms of, saw anew the arguments he engaged with.  No, he did not provide a dogma  or an opinion (except perhaps read carefully, question, seek freedom and decency for all…).  Yes, his life was lived within and amplified, what I consider, speaking as a moral realist and democratic theorist (Dewey was also), starting with Plato and Socrates, a great philosophical tradition…

END_OF_DOCUMENT_TOKEN_TO_BE_REPLACED

SOUTH CHINA SEA FACE OFF: Does this make ANY sense?

I pick up a Chinese language newspaper at the corner store in my Berkeley neighborhood every day, and almost every day there is an article about:

(a) US Navy activities challenging Chinese positions in the South China Sea; and/or

(b) China’s activities to establish sovereignty in areas of the South China Sea; and/or

(c) China’s military and naval buildup to try to get into the same league with the US.

The mainstream Western press has been reporting on these developments at an increasingly frequent rate.

Unquestionably a lot is going on in the South China Sea. I think we can choke on the detail if we don’t try to step back and gain perspective on the situation.

What’s the right way to think about what’s going on in the South China Sea? I wrote a short post on this several years ago … but I think it’s time to address the question a bit more thoroughly.

The “Law and Order” Paradigm

On the face of it, there should be no controversy. There are laws about this sort of thing, and everything should be decided according to international law, e.g. the United Nations Convention on the Law of the Sea (UNCLOS).

So it can be very easy for US people to cast the US and its navy as the “white hats” who stand ready to “police” the situation, keeping things fair for everyone. One problem: “the United States now recognizes the UNCLOS as a codification of customary international law, it has not ratified it.” Well, that’s awkward . . . .

In other words, before we say “Who is China to think they should be entrusted with being the traffic cop in the South China Sea?” we should first ask the question, “Who is the US to think theyshould be?”

The “Befitting a Global Power” Paradigm

As I look at what China is doing in the South China Sea, I can’t help thinking of a cartoon of Theodore Roosevelt treating the Caribbean Sea as a private lake belonging to the US.

[Not a bad time to make this comparison – President Obama just visited Cuba this week to attempt to reverse some of the effects of the past 50 years of antagonism between the US and Cuba.]

The US history of imperialism in its own backyard does not justify China in taking the same attitude; nonetheless, the fact that the US has really not come very far from its “We’re a global power and what we say goes” attitude makes it a little difficult to wonder that China may think they should be following in the US’ footsteps.

I think one thing we all need to do is notice the double standard that is applied to China. What’s good for the goose is good for the gander. China can legitimately be asked to exhibit a 21st century form of non-militaristic global power when the US decides to even make a head fake in that same direction.

(By the way, there certainly must somewhere exist a really clever cartoon updating the Caribbean-as-US-lake concept, i.e. South-China-Sea-as-China-lake, but everything I’ve seen so far is predictably based on boring dragon and Great Wall imagery.)

To many people, it probably seems that the issues in the South China Sea should just be viewed as a matter of property rights. Stuff (e.g. oil) is there for people to exploit, and everything has a price; in light of overlapping claims, the parties simply need to define rights and compensate each other accordingly.

In other words, “we should be happy with the solution, as long as it smells like capitalism.”

But aren’t the assets that lie under the South China Sea precisely the kind of oil and gas properties that are rapidly becoming valueless in light of the carbon bubble?  Given that the oil companies already have five times as many reserves as they can ever put to use without breaking the planet, aren’t those South China Sea hydrocarbons destined to stay beneath the sea where they belong?

“A Piece in the Larger Puzzle”

Looking at a map of US military installations in the Western Pacific brings to mind the old quip, “How dare they put their country so close to our bases?”

Moreover, of at least equal importance to bases is the terrifying firepower of US carrier strike groups. Is it any wonder that China is building up its navy? Though it may never come close to the strength of the US navy, China’s navy may have the ability to close the gap in its own part of the world.

Maybe the South China Sea is just a sideshow.

Maybe what we should really be talking about with China is a military stand-down, followed by a military build-down. 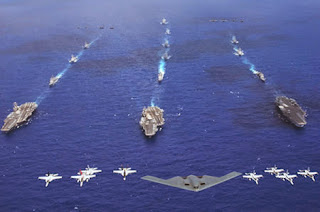 The opportunity: asking ourselves, “What would we do differently if we revised our myths of Asia?” 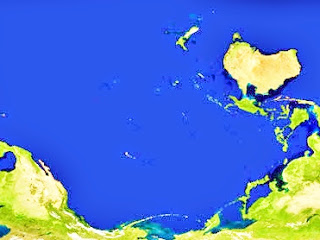 What people in Asia (and others) have seen for the past century is thatsomething is happening in the Pacific, and it’s being driven in part by advances in naval (and, subsequently, aviation and electronics) technology, and in part by powerful nations (principally, but not limited to, the U.S.) proximate to the area.

(See The Imperialized Pacific: What We Need to Understand) 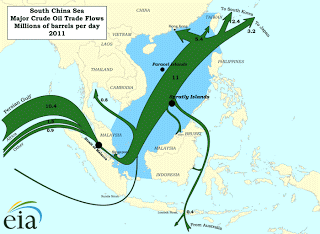 Strategic analysts are pointing out that the South China Sea is an area through which a vast amount of the world’s trade passes.  And some of them have made the modest suggestion that it would be a good idea for the U.S. to dominate it now, in much the same it dominated the Caribbean at the turn of the 19th century.